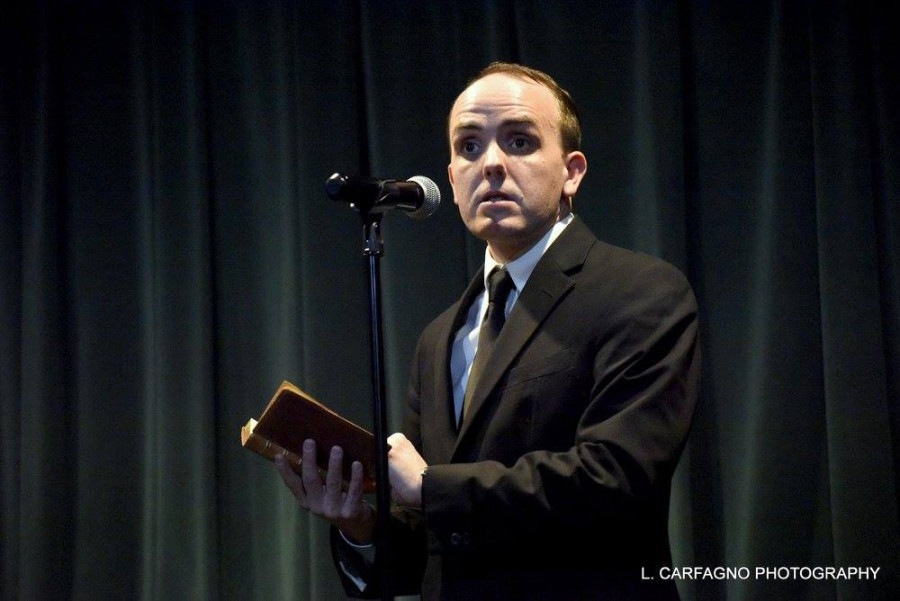 grrm's theatre for a warm and responsive crowd with all manner of grim and ghoulish questions and queries. If you were unable to attend, the Jean Cocteau Cinema filmed it and has it up online here:

Thanks to David and George and everyone who came out. It was a dream come true.

Dear Livejournal, so as folks who have been following for a while know, I have a whole complex as relates to my role as a consumer of internet content.  From time to time, I try to switch hats and produce some kind of comedic thing for others to enjoy.  Why even, this very Dear Livejournal was part of that urge to get out there and create something, even as ephemeral as this.  The end results usually last for a few weeks, maybe a month but seldom more than that.  I'm thinking specifically of Walken Theatre and my old, brief Judging Creation blog.  For the last few months, however, I have managed to start something and keep it going on a daily basis.  I've been listing, for over 160 days, the Lies I Want to Tell My Children.  Not only has the response to this been warm and encouraging, it's been fairly consistent.  Yesterday, someone told me I should just put them all in a Facebook public page so everyone could enjoy them and so I did and the results are there to be enjoyed.  My fear now is that, having put all this out there, my normal comedic stamina will start to lag and what was a daily piece of humour will slowly fade away only this time with a higher number of eyeballs to witness its gradual deflation.  I'm hoping I can buck the trend and get through a little over 200 more so that I can finally start work on the page a day calendar.  That's where the real money is.

Thanks for consuming me, Livejournal.  You're a good friend.

Dear Livejournal, I'm enjoying watching An Evening with Kevin Smith as I sit back and contemplate a rather successful Saturday.  We had a crisis this morning when Rachel discovered her sermon hadn't transferred to her data key at work and she was going to be in Kingston most of the day for an ordination.  Being the hero that I am, I strapped a dog to myself and made my way up to her church where I logged in and emailed it to her and then walked back down the hill with said dog, thus saving the day and getting the dog's necessary exercise out of the way.  I actually sat down with a book for probably the first time in a month and made some headway on China Mieville's Embassytown which I enjoy but am not in love with.  After that,  I attended my main monkeyman, DJ Sylvis' 40th birthday, ate me some gnocchi and geeked out with the best of them.  Finally, I came home, proofread a sermon and am now enjoying some late night comic stylings.

All in all, a good day, Livejournal.  You're a good friend.

Dear Livejournal, time to catch up on Game of Thrones to get ready for the finale this sunday.  Ravens are flying, swords are clashing, and everyone is frowning.  I'm really enjoying it, I must say.  Moreso than my forays into the first season of Fringe.  I am trying to get into that show but the main cast and the hum drum storytelling has so far not impressed me.  I've heard that the metaplot gets better and the second season improves upon the show greatly.  We'll see if I have the patience.  There is still a good deal of Breaking Bad for me to watch as well.  Ah, the wonderful world of television.  I've been away for quite some time and it's interesting to be slinking back.

Dear Livejournal, I'm hanging out tonight after a pretty blah day of work and am relaxing with an Evening with Kevin Smith.  I half-watched this years ago at Austin Peay and then I saw it was on Netflix so I decided to check it out.  It's enjoyable enough and I'm able to play Alpha Centauri while I watch it so no complaints.  It's still in stupid windowed mode but there you have it.  Tomorrow (technically today) Rachel starts up at Grace Church.  I also get to go check out the theatre space for our Fringe Show.  I'm at the stage where the lines are in my head but in a sort of jumbled mess so I get to spend the next month trying to get everything sorted out.  Now I must consider bed.

Be well, Livejournal.  You're a good friend.

Dear Livejournal, Nashville was quite the trip.  I ate a lot and played with my nephews although I also played a good amount of Fallout New Vegas.  Good game; I wish I could play more of it now.  Instead I must satisfy myself with some Alpha Centauri although, out of the blue, it's starting to open in a lousy windowed mode which cuts off portions of the screen.  Ah well.  Since returning, I've been watching a bunch of the first season of Fringe.  Not a great show but it's all right.  Denethor is pretty good but I want to punch Joshua Jackson in his throat.  Rachel starts up her work with Grace Church on Wednesday so tomorrow is her last day of freedom.  The Fringe show I'm in, Wishes are Horses, is going rather well although the Lovecraft play is hitting some snags.  I really hope we're able to iron them out.  It's going to be pretty touch and go for a while.  Wish us luck.

Thanks for sticking around, Livejournal.  You're a good friend.

Dear Livejournal, what began as a daily experiment in writing down the thoughts of my day or whimsical memories of my past has turned more into a weekly affair and I have to say I'm all right with that.  I was inspired to do this by Merlin Mann who talked about how important it was in the creative fields to just write something, anything once a day.  I'm finding with the Lies I Want to Tell My Children and also my various online roleplaying groups, that I'm meeting that need so this outlet isn't quite as crucial.  Also, I'm actually keeping busy.  Work and plays and puppies and wives all conspire to keep me going and that's a good thing.  I will still sign on to relate what I feel like relating but I think it's worth knowing when a project's parameters have changed.  In recent Kessler news, Rachel has returned safe and sound from England/Scotland and soon we will be off to Nashville to see family and drink much cider.  I'm looking forward to all of it.

Be well, Liveournal.  You're a good friend.

Dear Livejournal, it has been a while.  Currently, my wife is traipsing around England and Scotland with Alice, hitting various religious sites and taking a gargantuan amount of pictures if I do know her.  Bilbo and I have been keeping things pretty calm in the house although there has been the occasional altercation.  Right now, I am in one theatrical production going up for the Fringe and trying to arrange for another theatrical production that will be going on in Hamilton, God willing.  I hope that I can balance the two but we shall see.  Today and tomorrow and then on Sunday, I am occupied with Standardized Patienting and lots of it.  It's been enjoyable but the sheer hours it's taking up is quite daunting.  Luckily, we have arranged for folks to look in on poor Bilbo so he is not caged up all day.  I'm looking forward to seeing my family in Nashville in about a week; indeed there are plans for gaming so hijinx may abound.  More news as it arrives.

Forgive my absence, Livejournal.  You're a good friend.

Dear Livejournal, the Reverend Doctor the Missus and I saw Bridesmaids this evening and I thoroughly enjoyed it.  Had I seen it without hearing how much better it was than people expected it to be, I probably would have been surprised by how much better it was than I would have expected it to be.  However, it absolutely met my expectations which were at a nice, healthy level.  I've been watching a ton of the IT Crowd, so I was particularly happy to see Mr. O'Dowd getting some healthy screen time.  Rachel was mortified throughout much of it though I did catch her laughing against her better judgement.  I highly recommend it for all the reasons.  That is all for now.

Be well, Livejournal.  You're a good friend.

Dear Livejournal, so far HBO's Game of Thrones has kept me happy.  I wish Dinklage were allowed to use his own accent as I think putting on accents invariably weighs down a performance without actually enhancing it.  Still, I understand the urge for uniformity even if there are some undeniably slavic tones peeking through Jaime's lines.  The pacing has been pretty decent and I'm enjoying seeing scenes from the page come to life.  I'm very curious, though, how all this must look to someone who's never read the books.  I'm able to fill in gaps as I watch but I don't know if it's in any way comprehensible to those who haven't ever cracked those tomes open.  Also, are they getting a different narrative experience as the mystery unfolds on the screen instead of on the page and is it better or worse than my own?  There's no real way to know but it's an interesting thought experiment.  I'm loving the fact that I sell George RR Martin at least once a day now as opposed to three or four times a month as it once was.  Warms my heart.  If only Tuf Voyaging were still available for sale.

If wishes were fishes, Livejournal.  You're a good friend.